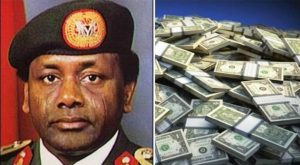 THIS THING IS GOOD

My dutiful responsibility in this exercise is very simple. It is to keep the records straight so that we can be often reminded of what actually happened in Nigeria at a particular time and the role-play of individual personae dramatis associated with events of such times. Today, we are dealing with a particular historical event, albeit fighting corruption and bringing back home Nigeria’s wealth – wealth excellently looted by a Nigerian Head of State – General Sani Abacha [a Four-Star General of the Nigerian Army]. May God bless his memorable Soul in the kingdom of scandalous looting.

This conversation is never a verdict that the Gentleman Infantry officer of the Nigerian Army was the only Head of State [or President of the Nigerian Federation] that would be a thief. No, it would never be wise to conclude like that. Not with the well-known military antecedents of the Nigerian Gentlemen officers’ in corruption and kleptomaniac acumen. We know them. And that is not to say that the malady of stealing the Nigerian common wealth, dry and silly, is limited to the military era alone. No. The Nigerian democratic governments that succeeded the military since 1999 came with a refined version of the kleptomaniac drive, albeit untamed, unprecedented and unashamed. The Nigerian People’s common wealth is being looted, with impressive regularity, even as this piece is being written.

Today however, in this exercise, we are looking strictly at the Sani Abacha’s looting facts. It is an endeavours in establishing the fact that he “looted and carted away”, and to establish this, we must consider some contrary opinions; for and against, in the matter. There are four angles to look into in establishing the fact, or even the fallacy, of the episode.

First, we have to look at the statement credited to President Muhammadu Buhari; both before becoming President, and even after being sworn-in as a Constitutional Executive President of the Nigerian Federation. He; Muhammadu Buhari, defended General Sani Abacha astutely, saying the man never stole Nigeria’s money.

We shall, after presentation of President Buhari’s wrong and misleading information, present the evidence credited to Major Hamza Al-Mustapha [Chief Security Officer to the late Head of State]’s claim that the loots were not stolen by General Sani Abacha, but was instead, stolen by his successors and placed in different bank accounts overseas under “Abacha’s name”. His lies in defending his former boss differed logicality, reasons and common facts of world’s rudiment of financial transaction. It was nothing but naked absurdity from an uninitiated individual. I will present his narration nevertheless for your consumption as such would navigate us to the “sea of reality” some Nigerians can build in preserving corruption.

This will be followed by evidences from some countries and major cities around the world where Abacha’s loots were laundered and deposited; confirming the names of those family members and nefarious Associates in the stealing [one of the criminal associates that helped Abacha so much in that tragedy of unequalled stealing is currently a serving governor in one of the States in Northern Nigeria]. The countries and the cities are United States of America, Switzerland, United Kingdom, Jersey, Liechenstein and Luxembourg.

We shall add factual evidences of the Nigerian Government’s pursuance of the loots; a journey that started off in 1999, when President Olusegun Obasanjo took over from General Abdulsalem Abubakar, who represented the last of Military interloping into the serenity of Nigerian political domain. We shall add to the federal government efforts in identifying the loots and efforts in retrieving same some different courts’ judgement, both in Nigeria and Overseas – all confirming beyond reasonable doubt the propensity of General Sani Abacha’ stealing mechanism.
Your pronouncement of judgement might be even better than mine, at the end of going through all evidences herein produced, that Sani Abacha was a thief, Muhammadu Buhari gave wrong information in evidence, while Hamza Al-Mustapha remains a chronicle liar.
Fact Number 1. Against President Buhari’s information – albeit wrong information.

Ten years ago, President Muhammadu Buhari, who served as the Chairman of the Petroleum Trust Fund (PTF) under the late former military Head of State, Gen. Sanni Abacha denied that his former boss looted the treasury, but his government on Tuesday confirmed the repatriation of Abacha loot. The Ministry of Finance has announced that $322.5 million was returned to Nigeria by the Swiss Government as part of funds looted by the late Abacha.

In June 2008, Buhari who had just lost election as presidential candidate of the All Nigerian People’s Party (ANPP) gave Abacha a clean bill of health in Kano after the remembrance prayers marking 10 years of his death. He said there was no basis for accusing Abacha of corruption.

“Ten years without the late Abacha, the said allegations remain silent because there are no facts. All the allegations levelled against the personality of the late Gen Sanni Abacha will remain allegations. It is 10 years now, things should be over by now,” Buhari said then according to newspaper reports. He added that rather than maligning Abacha, the late ruler deserved to be praised for initiating developmental ideas that moved the country forward.

But Abacha has been accused of stealing nearly £5 billion while in office, out of which over $1 billion has reportedly been recovered from various sources around the world. On Tuesday, the Federal government through the office of the Minister of Finance, Mrs. Kemi Adeosun, confirmed the release of $322.5 million in a statement issued by her Media Adviser, Oluyinka Akintunde. The minister said the money was paid to the Federal Government through the Central Bank of Nigeria on December 18, 2017.
Also in 2003, the government announced that a total of 22.5 million euro Abacha loot was recovered. The then Minister of Justice, Mohammed Adoke said a total of 175 million euro was also recovered from the family of the late head of state following a confiscation order by the Supreme Court of Liechtenstein. The Swiss government as at December 2002 said that it had so far returned to Nigeria $700 million stolen by the late dictator and deposited in several Swiss banks.
Femi Falana, human rights lawyer, has asked President Muhammadu Buhari to apologise to Nigerians over his comment on funds diverted by Sani Abacha, the late military dictator. Buhari had said Abacha did not loot the country. Last year alone, the federal government recovered $321 million Abacha loot from Switzerland.

Speaking at a conference organised by the Human and Environmental Development Agenda (HEDA) in Abuja on Wednesday, Falana said it has been established that Abacha stole over $5 billion. He said about $3.5 billion had been recovered from the Abacha Loot. “On account of the loot that has recovered so far by the federal government President Buhari ought to publicly apologise to the Nigerian people having denied that the late General Sani Abacha was involved in the criminal diversion of public funds,” Falana said.

The concluding part comes up in the next blog, for your enjoyable reading.

124 thoughts on “For the records:​ Abacha was a thief; Buhari gave wrong evidence, Al-Mustapha a liar (Part 1)”