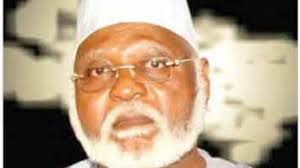 Last week was hot and anguishing for almost all Nigerians, except a few fractions of us that have the capacity of operating Nigerian darkroom of intrigues. I am, unfortunately, not one of them.
And this is because of three different heavy statements issued by three different Nigerians – two of the three personae dramatis that issued the statements are heavyweight players, while the third is an identifiable heavier weight personality.
All of them are Principalities and Powers in the Nigerian Coven place of abracadabra – a place where only those mightier than spiritual angels; not beautiful daughters of Adam being called angels, dare come to manifestation. And each of those three statements issued by these three privileged men of authority has more devastative power of penetration than those two atomic bombs that dropped on Hiroshima and Nagasaki on the Eight month of the year of our Lord – 1945 (August 6 and 9, 1945).
As those nuclear weapons detonated by the United States of America brought an abrupt end to the Second World War, the statements of these “unique men of distinction in the Nigerian game of manipulations” might bring an abrupt end to the country’s long standing dark tunnel.
The end of this metaphor might be hopeful. It might also be hopeless. Only time will reveal what awaits us as a people – citizenry of a nebulously packaged country called Nigeria.
It therefore shall remain a worthwhile endeavours to bring the interpretation of these three statements to the front burners of tomorrow’s discuss, being Monday, February 22, 2021, at Lagos Talks 91.3 FM, from 0930-1100 hours, when The Guru shall come on air, doing what he knows how to do best. Let us take some of the topics for preview.
Insecurity: Nigeria heading to point of no return unless. . . General Abdulsalami Abubakar – Nigerian former Head of State, and this was adequately reported by both local and international Media.
* He says embers of disunity, anarchy, disintegration spreading fast
* Urges Governors to tune down their rhetoric.
* Told Governors to take full responsibility for managing frustrations within their States.
Won’t you pay attention to this statement?
I think we should, because l am doing so very seriously, and below is part of my thought.
Absolutely, General Abdulsalami Abubakar; the last of Nigeria’s interloper-Power-drunken Military Head of State, remains a man of honour within comity of world’s gentlemen. He relinquished power, even as Head of Nigerian Military Government, during his time, without attempt in elongation.
The good news about this gentleman officer predates relinquishing Power because it is on record that he wasn’t one of those Nigerian overzealous military officers that logged their names permanently amongst “perpetual coopists” – like the types of TY Danjuma, Ibrahim Babangida and late Sani Abacha.
He was just cooling down in his military barracks, with “a plate of pepper soup and a bottle of beer”, in the words of Alozie Ogugbiaja – that brilliant Police PRO that the Nigerian Military dealt a terrible blow, when death visited Sani Abacha, slashed and tucked him away into the coven of infamy, before bringing in Abdulsalami Abubakar into Power.
And the man – Abdulsalami Abubakar, knew the right time; like a good Actor, to vacate the Stage of play; always when the ovation is loudest, and he took a bow, in spite of greedy colleagues, and some deadly praise-singing civilians, asking him to occupy into “eternity” because he was the God-chosen. The man left with his head highly raised in honour and dignity. And this singular act carved a glorious epitaph for him.
However, it might not be too factual to conclude that Abdulsalami Abubakar is not part of the architectural design that has “helped” Nigeria into the present route to perfidy. A quick responsible check into some mouths in 1999 will easily confirm this conclusion.
Let us take a cursory look into the 1999 Nigerian Constitution he handed over to us – Nigerians, we would identify, not only the frauds therein contained in that Constitution, but we should be able to see how that law book pitched Nigerians against each other – in terms of religions, ethnicity, tribal and other things.
He even caused it to be written, as a preamble, that “we, the people of the Federal Republic of Nigeria having firmly and solemnly resolved.” Read the 1999 Nigerian Constitution please.
Where, when and at what place and time did the People – or Nigerians, come together to resolve the proprieties of that Constitution? That became the false foundation on which the 1999 Constitution was anchored. All the remaining anomalies included in that fake book merely remain extension of fallacies.
It is for this reason that l fully sympathize with this my respected former Head of State, and may keep him in perpetual pity as l now know that he zealously accomplished a wrong thing in good faith. And this wrong accomplishment; which is the 1999 Nigerian Constitution, shall remain the sword of Damascus; designed by error of judgement of General Abdulsalami Abubakar, taking Nigeria to the land of “no return”, which he identified in his lamentations.
And it is for this reason only, that many Nigerians may not be willing to say amen to his prayer, presented below.
” My prayer is that Nigeria should remain as one indivisible nation and this could only be possible if we collectively shun any form of tribal, religious ,ethnic and political sentiment to meet our desires objectives of moving the country forward. We must rise up to work towards sustaining the nation cooperate existence and promoting our hard earn unity which our founding fathers had lay for us”.
Abdulsalami Abubakar’s statement, enumerated above led the trio of the three top Nigerians last week. Let us run very briefly through the remaining two but l must warn that readers’ discretion is needed as these ones are a little outside the circle of sanity.

“Don’t be a coward, defend yourself against bandits – Defense Minister tells Nigerians”. Isn’t this a weird advice?
When General Theophilus Yakubu Danjuma; a one-time Chief of Army Staff and another time Minister of Defense for Nigeria, told his people of Taraba State to defend themselves, this government of Muhammadu Buhari – where retired Maj Gen Bashir Magashi now serves as minister of defense, took the superior General Danjuma to the gutters, for telling his people to defend themselves. Listening to the video clip where the Minister gave the advice, one would see embodiment of contradictions as he says Nigerians should not “acquire illegal arms”. Yet he wanted them to confront bandits fully armed – bandits that his troops; armed by the Nigerian State, sometimes run away from.
The man spoke of his bravado, in confronting persons like bandits; an arrogant boastful narration that has no historical backup evidence. What do you think of this man and his advice?
Then the third and the last for today. And that is the Governor of Zamfara State. Listen to what he said:
“Not all bandits are criminals”, so says Zamfara State Governor; Mr Bello Matawalle.  I think the problem with this governor might be his educational background.
It is for this reason that l totally agree with Dr Reuben Abati of the Arise Television, who suggested that the Zamfara State Governor ought to know where to locate today’s world oracle of investigation, called Google in his mobile phone, which he carries about. If he knows how to consult Google, he would have known the meaning of the word BANDITS, because the ignorance he demonstrated suggests that there are some “good bandits while there are some good bandits”.
What is the dictionary translation of the word Bandit? What has led the gentleman Governor from Zamfara State into huge Sea of confusion is just the meaning of the word bandits.”
Enough of this preview as we shall be dedicating the whole of tomorrow; jointly of course, to the topical review of issues.
We shall be having our usual Historical Perspective, Knowledge Dropbox and the newly introduced Periscope – the latest is taking us to Delta State tomorrow, yet still.
How many times have you visited my website – www.godwintheguru.com, this past week?
Wow! You are missing if you are not a regular visitor to that site. Be that website-compliant please.
Godwin Etakibuebu (The Guru).