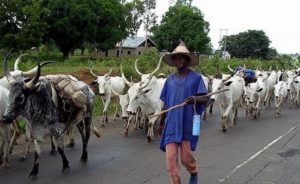 On behalf of #PositiveNigerians, l welcome Governor Aminu Masari of Katsina State to the Nigerian Fulani Hall of Fame, as he is being inducted as  Positive Nigerian Personality of the Century.

Officially invited for his induction are:
(1) President Muhammadu Buhari (Grand Patron of Miyetti Allah Kauta Hore)
(2) Abubakar Malami; Attorney General of the Federation and Nigerian Minister of Justice – also a die-hard fanatic Representative of the Fulani Ethnic Nationality of West African and the Sahel Region, and a Senior Advocate of Nigeria.
(3) And of course, the indomitable loquacious and garrulous Garba Shehu; the infamous “president” of the Nigerian “Presidency”.
This induction is in recognition of Governor Aminu Masari’s patriotic stand In pronouncing that “open grazing is un-Islamic”.
This is part of what he said:
Katsina State Governor Aminu Bello Masari on Wednesday declared support for his southern colleagues on their stand against open grazing and calls for restructuring of the nation.

Throwing his weight behind the governors’ stand on open grazing, Masari described the practice that encourages herders to move from one location to another as ‘“un-Islamic”.

Yes, the induction ceremony is awaiting the arrival of the three gentlemen mentioned above. However, by the Powers invested on me, as the de-facto and the de-jury Representative of #PositiveNigerians, if non-prompt arrival of the Aso Rock Villa’s Tripods  would constitute delay to this worthy national project – first of its type in the annals of Nigeria history, we shall proceed with the induction.

With some noise and standing ovation, ladies and gentlemen, let us welcome Governor Aminu Masari to the Nigerian Hall of Fame of most eminent and sincere Nigerian patriots.