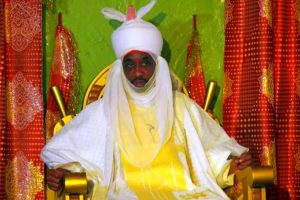 Relief came the way of the Emir of Kano, Sanusi Lamido Sanusi, last week as some great Nigerians rescued him from the shadow of death.
We were told that with the intervention of these Nigerians, which included the Acting President; Professor Yemi Osinbajo, General Ibrahim Babangida, General Abdulsalam Abubakar, the Sultan of Sokoto, amongst many others, what would have been a doomsday for the man was averted, as the State Governor gave instruction to the State House of Assembly to stop the probe; a probe that was meant to consume.

While we must be grateful to these messiahs who fought gallantly in rescuing a veritable prey from the Lion in its den, we cannot overlook the ‘generosity’ of the Lion that let go an already caged prey. The caged prey in this drama is the Emir; Mallam Muhammad Sanusi 11, while the Lion is no other person than the Governor of Kano State, Abdullahi Umar Ganduje.

I salute all involved in this rescue operation fervently. However, if the truth is to be told, the war is not yet over though a battle has just been won.
There are yet many rivers to be crossed before arriving the land of Eldorado in Kano Emirate. Let us try to “decode the coded rules of engagement” in the war going on in Kano. To do this successfully, we should be analyzing the characters of those personae dramatis [at war] and the functionality of the invisible powers behind the façade. Knowing the personae dramatis and their characters is not as difficult as identifying the invisible individuals who are dictating the terms, places, times and instruments of the war in Kano.

Let us start with the “rescued prey” himself; Mallam Muhammad Sanusi 11. Of course, Sanusi Lamido Sanusi; SLS, was not just an ordinary person that could easily be pushed aside. His giant strides in the public service made statements for themselves. While he publicly took the landscape of the Nigerian financial empire with such unchallenged prowess, he was not necessarily admired by all those who crossed his path but those who ignored him, did so, mostly to their peril. He is conventionally controversial, royally loquacious, brilliantly enigmatic, fearlessly audacious, religiously scholastic and socially influential.

To some people, the Emir is a religious fanatic. This class of people would readily point to the controversy that roped his name into the brutal beheading of an Igbo trader; Gideon Akaluka, in Kano on 15th of August 1995, an episode that pitched General Sani Abacha’s government against him, and eight others suspected to have been involved, until a former Chairman of First Bank; Alhaji Umar Mutallab, came to his rescue.
You may not like him, given his frankness and bluntness, with boldness of course, when addressing issues, but you might be compelled to respect and admire him when it comes to presentation of facts on figures and his in-depth knowledge on most topics. Truth is that the Emir is extremely and adorably brilliant. His tenure as the Governor of CBN shall remain a positive watershed in the annals of the Nigerian financial developmental history.

My limited knowledge of the man tells me that he has this “natural repulsiveness to everything anti-knowledge and this would always stare up a holy rebellion” in him against authorities, and inclusive of Presidents, at any time.
He was boldly up against President Goodluck Jonathan about the way he ran the economy – a stand that put him in trouble of being suspended from office as Governor of CBN. He has not proved to be different in the present dispensation, which is why he told President Buhari recently that “if this government continues to behave the way the last government behaved, we will end up where Jonathan ended. You may not like it, but that is the truth. You have to listen”. Will the Emir learn to shut-up his mouth from saying what he believes, even after the interventions of these great Nigerians? I have my doubts.

The second personality for consideration on whether the war in the Emirate has ended, with the intervention of these great Nigerians or not, is the Kano State Governor; Abdullahi Umar Ganduje. I doubted so much if his ambition for second tenure [2019-2023] would not be a casualty as long as Mallam Muhammad Sanusi 11 remains on the throne. My conclusion is on political exigency. The Governor has fallen out of favour with his predecessor [Rabiu Kwankwaso] who made him Governor in the first place. He has chosen to cast his loyalty on President Buhari’s presidency so that his second tenure can be actualized.
In the other hand, Senator Rabiu Kwankwaso himself, being seen as a threat to President Muhammadu Buhari’s second tenure [that is if his health would allow him] needs to be “caged” urgently if Ganduje would continue as governor till 2023, because a “loosed” Kwankwaso in Kano State could pull more than enough influence to put Ganduje in the dustbin of political oblivion, by 2019. This feared-influence of Kwandwaso is real in Kano, not necessarily because he was a past governor, but more of the fact that the Emir he made [Mallam Muhammad Sanusi 11] could influence the peoples’ vote against Ganduje.

The third personae dramatis that could elongate the war in Kano Emirate beyond the peace created by these great Nigerians is the Buhari’s presidency, and this is for the reason given above. President Buhari second tenure presidency’s ambition [again, health willing] sees Kwankwaso as enemy and if Mallam Muhammad Sanusi is Kwankwaso’s friend, then he [the Emir] remains a terrible enemy of Abuja that must be ferociously removed with “military alacrity”.
While we thank the peace makers for what they have been able to achieve so far, at least for now, the last of drums of war’s beating in the Kano Emirate might not yet be over. It is only time that shall speak and interpret the political scheming of Kano Emirate.