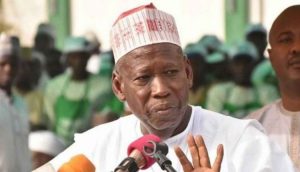 In colourful Kano State, when Coronavirus came to town, it started with the deportation of Almajirais, from the State to many other Northern States, by the discretion of the almighty Executive Governor; a man who knows it all, and who can do it all. This did not work, so it seemed. The man shifted his style from instrumentality of deportation of Almajirais to another area he knows how to operate better – blackmail.

This was when he placed a demand on the Federal Government to release the sum of 15 Billion Naira to him. Or to the State, you may want to correct me. And l will accept such correction, because it is not all about himself as the Governor, but everything is about his State – a State he so loves and which he is ready to die for. Was that the not the hypocrisy of the Dollar Merchant from Kano? He needed that whopping amount of 15 Billion Naira on the table; his table of course, from the federal government, before he can start negotiation on which way forward with Coronavirus.

I don’t think you might want to blame the man too much. That is if you knew what was going on in his mind at that period. Of course, he probably have “such a loosely thinking right” to conclude that if Lagos State with much lower population; another dangerously manipulated political modus operandi of the Northern Oligarchy to drive the Nigerian State to a pre-planned cull-de-sack oblivion arena, could get the sum of 10 Billion Naira from the federal government, nothing would be wrong for him to get “just only” 15 Billion Naira from the same source.

This must have been his thought. But better people would have seen it [the thought of demanding for such money without lifting his hands in doing any visible thing] as contraption of a corrupted and un-innovated mind. To compare what was going on in Lagos then and still going on as we discuss this, to anything in Kano would be a journey into the wilderness of infamy. But that was the route the man chose to take.

This demand failed, or so it looked at that time, because there remains yet an umbilical link between President Muhammadu Buhari and the great Governor from Kano that might forever; in the lifespan of this Buhari’s government, defy cogent and reasonable interpretation. Don’t just go there because you might not be able to understand the relationship.

If the entire above looks like a preamble, it must have been for the reason that Kano has remained conspicuously different for the past 800 [or more] years of its historical existence. Pardon the length of introduction [of the preamble] ipso facto. Now, let us discuss Kano State and the [incumbent] personae dramatis at pinnacle of political affairs of that beautiful State.

Kano is big, Kano is mighty and Kano is historical. And it has been in the forefront of many things – good and bad, in Nigeria generally, and the North particularly. On the eve [or so it looked] of the Nigerian Independence, the British Government “travelled back to Kano”, did something abnormally; which was to remind all other geopolitical zones in the country, that Kano was specially larger than others within the territorial integrity of the nebulously packaged Enterprise called Nigerian. That was the mock battle that took place in Kano and the re-hoisting of the Jihadist’s flag, by the British Colonial Authority.

Please, allow historical documentation to fill every other vacuum that this narrative fails to accommodate in the “mock battle” and re-hoisting of the flag.

Let us go back to start from the beginning. The first index case of Coronavirus broke out in Nigeria on February 27, 2020, and expectedly, it happened in Lagos – the cosmopolitan business Centre nerve of Nigeria. It should have remained what Lagos is known for – “Eko-for-show”. Except this time, it was not going to leave Lagos alone with its usual bustling lifestyle, because the name of the ‘visitor’ is not “owa-nibe”, but something more deadly. And its name is Coronavirus or COVID-19 – a dangerous guest indeed.

The deadly “visitor” took its journey, gradually but with calculative accuracy; as it has done from its starting point in that inconspicuous Wuhan Region of China across to the world, from Lagos into other parts of Nigeria. Every State in the Federation was concerned in absolute fear and reverence for the unwanted “visitor” and they got themselves [the States] prepared as much as the Nigerian Federation’s preparedness for any eventuality could afford. In another word, there is no State in Nigeria that could prepare for Coronavirus more that the Nigerian nation could deliver.

Since the Nigerian system is never prepared for anything positive, in its historical entirety, the States, mostly Lagos State which stood tall – over and above all obstacles, with innovational credibility – therefore need to be given accolades. That is not to say that all the States of the Federation rose astutely to confront the deadly rampaging unwanted “Visitor” – COVID-19. Unfortunately, the leadership’s crown of those few States “caught sleeping” when the “killer Monster” came to town was invested on Kano State – courtesy of the Governor. And the man and his State did not disappoint the expectation of the audience that gathered to witness the investiture of that “notorious crown of shame”.

Can we please go back to the worthy Preamble of this essay and accept same as having spoken adequately in the narration of events that happened in Kano State as it relates to the Nigerian Coronavirus era. With that, we can capture the underlying metamorphosis of Kano State thus:

The big man in Kano, with all his nervousness in a heart that is highly and corruptively twisted around “poverty of the human’s mind”, as Psychologists would say, exposed the leadership dilemma of the Nigerian continuous failure qualitative political leadership. You will not be wrong if you call it a contraction of failure in qualitative and accountable leadership.