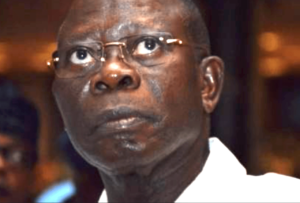 On Sunday June 24, 2018, Adams Oshiomhole was sworn-in as the National Chairman of the All Progressives Party, having emerged as the preferred candidate on affirmative votes by the Party’s delegates from the 36 States of the Federation and the Federal Capital Territory at the Party’s National Convention which began on Saturday June 23, 2018, in Abuja. Oath of office was administered on him by the Minister of Justice and Attorney General of the Federation, Mr Abubakar Malami [SAN].

In administering oath of office on him, a smooth and successful transfer of power from John Odigwe-Oyegun; the pioneer Chairman of the Party, was thus concluded. Smooth and successful, so it seemed on the surface of things. The transfer of administrative baton was successful of course but it was far from being smooth. The route of taking over from the pioneer chairman [John Oyegun] was laid with political thorns and many other visible plus invisible properties of war. Yet, Oshiomhole, with the backing of President Muhammadu Buhari and that of Asiwaju Ahmed Bola Tinubu won the battle and took over that golden baton of leadership.

The man [Oshiomhole] came into the office of the National Chairmanship of the APC with his own peculiar style. It was a style of militancy. It must be acknowledged however that he did not invent this style of leadership at the entry gate of the APC chairmanship. As a labour leader, he rose to become the President of the Nigerian Labour Congress. He led the Nigerian workers’ movement when all workers in Nigerian; in spite of whatever sector they belonged, remained under one umbrella of a Congress.

He was almost as powerful as the Nigerian number 1 Labour Leader [I called him World number One Labour Leader], the late Pa Michael Imoudu of blessed memory, in matters of unionism. Incidentally, both of them came from the same geographical area of Edo State, bonded in the same language. His Khaki style of dress marked him out as a man always prepared for battles. He is brilliant and eloquent in speech. Of course, he was brilliant from the beginning and brilliant still. These were the attributes that saw him through the turbulences of political unionism and gave him the leeway into political governance even as he emerged as the Executive Governor of Edo State with a two-tenure profitable achievement. These were the qualities he brought to the throne of the National Chairmanship of the All Progressives Party.

However, in spite of the encouraging resume with which he arrive the throne, it seemed there are one or two things he forgot to bring with him to the position. And the absence of these one or two things has now promoted his shortcoming to the pinnacle. A cursory look at his performances since ascending the throne of the National Chairmanship would reveal that the type of arrogance he has displayed is the evidence that he forgot the very colourful characteristic of humility behind when he was packing his luggage for the journey. It has also been seen that he is too rash and brash for the exalted office of the Chairmanship. How these malfeasances and irritating behaviours were not seen adequately manifested when he was a cherished labour leader and even as a Governor of a State beats imagination of many.

The first thing he did immediately after been sworn-in as the National Chairman of the All Progressives Party was to assume the executive authority of the government that the Party [APC] formed; whereas the government, though an off-shoot of the Party is a distinct and different autonomous Body from the APC. While the former is a creation of the Nigerian Constitution, the latter remains under the constitution of the Party – meaning that the latter remains purely inferior to the former.

Again, while he was elected as Chairman of the APC by members of the Party, using that piece of paper known as the “Party’s Constitution”, the President of the Federal Republic of Nigeria is elected into office by the whole country as a Constituent; using the Constitution written by “We, the People of Nigeria” [forget either this opening paragraph of the 1999 Nigerian Constitution, as amended, is one big fraud or not}.

While displaying this unglamorous ignoramus, he revealed to the whole world one of his greatest weak points, albeit that the “fire” in him has not been ice-caked with in-depth knowledge on the one hand. And in the other hand, by not knowing who controlled government between a chairman of ruling party and the president of the government of the day, he inadvertently presented President Muhammadu Buhari to all as a very weak leader who does not know what he is doing or who is not in control of affairs in the government. Let us prove this.

He brought a very germane issue about officials of this government, especially those appointed into office by the President, talking of the Ministers and other departments of government, as not performing in obedience to government rules and regulations. There is nothing wrong with that observation made by Adams Oshiomhole because it is what every keen observer of Buhari’s style of government knows; in that the President operates more on abdication of Authority than delegation of Authority. A case in reference was when the President once admitted that his own appointed Inspector General of Police did not carry out his order yet; there was no sanction against the man who disobeyed his instruction to the detriment of Nigerians.

So, when Adams Oshiomhole, having assumed duty as the Chairman of the APC, directed his fury [which might be very genuine anyway] against the Minister of Labour and Productivity, Dr Chris Ngige, of not constituting Boards for parastatals under his ministry; an action the Chairman alleged bordered on corruptive tendency [which might be true as well] he spoke well as it looked, except that he did not allow “the profitability of wisdom to direct him”, as the Bible would say. Besides, he exposed the frailty and inadequacy of Buhari’s maladministration to all by emphatically saying that “if the President tolerates such from you, l will not tolerate it”, adding that “l will suspend you from the Party and see if the President will retain you in the government as a minister suspended by the Party.”

That declaration should not have come out from him as it manifested two maladies. One, he lacked the authority to function as President. It is the President that formed his cabinet and not the Chairman of the ruling party. The outburst therefore exposed him to the ridicule of a man without knowledge. Come to think of it, it is not on record that the Minister in question, ditto other Ministers, constituted the Boards that Oshiomhole almost killed himself for. Worse is the fact that the President did not raise as much an eyebrow against the Minister in question. This is one proof of Adams Oshiomhole’s indiscretion and infamy. Let us look at another one.

The recent battle of defection that came against the APC; mostly at the National Assembly where good number of members, including the leadership of both the Senate and the House of Representatives, left the ruling Party for the main opposition Party [People Democratic Party] opened another obnoxious door of infamy to the fact that Oshiomhole is more of a liability to the APC than an asset.

First, he described the defecting members as a people without political fixed addresses. He called them unprintable names, including referring to them as liabilities. He affirmed that APC would not miss them. He shouted it loud and clear to the top of his designed political roof of arrogance that he, as the chairman of the party, would not lose sleep over “those people without political character and heritage” referring to the defectors.

He gave a deadline and specific methodology for the impeachment of the Senate President without enough and decent sagacity on behavioral pretense. He became so crude in the prosecution of his anger, which became uncontrollably obnoxious. He called both the national and international Media one time too often and each of such meet; he threatened brimstones appropriate for Armageddon fire, so much so that people started questioning the sanity of the man. In one of his moves to actualize his self-saddled assignment of perfidy, a security Chief became the casualty.

Yet, Oshiomhole would not bring himself under control. What he succeeded in achieving at the end of the day was nothing but bringing his Party [the APC] under ridicule and prompting President Buhari up as enemy of the National Assembly.

The question that is begging for a succinct answer is this: Given these two instances amongst avalanche of blunders, is Comrade Adams Oshiomhole an asset to the All Progressives Party or a liabiy?

Then the Governor Abdullahi Umar Ganduje of Kano State and the hidden treasure of Dollars only, should be commanding our attention next week. Have you not heard of the gossip? There is a video clip that has gone viral in the social media showing the exalted Governor allegedly collecting bribe, strictly in America Dollars only, from someone. The fact that the Kano State House of Assembly did not start by debunking the story but instead moved into constituting a panel to investigate the matter, in mind, is giving the scoop some tilting of credibility. But we have to wait till next week before opening this Pandora box of stinking warms.

Above was my column on Comrade Adams Aliyu Oshiomhole some two years ago. It is like the prophetic opinion l held then had come to pass.

1,344 thoughts on “IS ADAMS OSHIOMHOLE AN ASSET OR LIABILITY TO THE APC?”