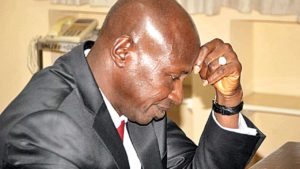 Most Nigerians know the fact that it was just a matter of time for the bubble to burst on Ibrahim Magu; President Buhari’s appointed Chairman of the Economic and Financial Crime Commission.

The peoples’ expectation was based on the fact that as much as President Buhari liked the appointee – Ibrahim Magu, to remain as the Nation’s economic and financial crime fighter, the Nigerian Senate that has the final say in confirming such appointee of the federal government refused to confirm him twice.

The Senate’s refusal to confirm Magu has nothing to do with the perceived difference between the 8th Senate and the Executive at all. But instead, another organ of the federal government – the Directorate of State Security [DSS], provided the Senate with the instrument of rejection. There was a damning report of many atrocities in misdemeanour, corruption and sabotage, written against Ibrahim Magu by the DSS, which was submitted to the Nigerian Senate for processing of the man’s confirmation.

The Senate could not confirm the man, in view of the overwhelming negative report from the DSS against him. The Nigerian Senate wrote to President Muhammadu Buhari, informing him why his nominee could not sail through the scrutiny. It [the Nigerian Senate] attached evidences, which were nasty but authenticated report from the DSS to the President, for his perusal and action. This happened twice.

Yet, the President, without asking his own-controlled DSS to change the negative report to something positive so that his preferred candidate could sail through the turbulent and hot waters of confirmation at the Senate, kept the man at helm of affairs at the EFCC as acting Chairman. The honour [if that is actually honour] that Magu got from the President by that action of retaining him, even when the confirming Authority rejected him, was that of remaining the only “one person in Nigeria’s history to act Chairmanship of such office for five years and left only in acting capacity” – a terrible tragedy.

Why did Buhari retain him this long? What are the President’s gains for this action? We may have to discuss this another time because President Buhari couldn’t have done it for nothing. He had his reasons amongst diversified costs of political survival. Let us leave that for another day.

Ibrahim Magu; President Buhari’s biggest hunter against the octopus prey called corruption, is now the hunted. Magu was hunted down on Monday, July 6, 2020, with arrest or invitation, on a major road in Abuja, as he left his office, and heading to the Police Headquarters, with his security outfit. His car was flagged off the road by a Chief Superintendent of Police, who respectfully told the anti-corruption Czar that his attention was needed at the Presidential Villa to meet with some high crops of investigators.

The Chief Superintendent did not come alone. He came for the arrest [sorry – invitation] with his own security outfit; all fully armed with enough automatic weapons to counter any act of defiance. Ibrahim Magu however, as it was reported, humbly followed the junior Supol [Superior Police Officer is a Police terminology] without ado.

The invitation to face a presidential panel of interrogators; a panel being led by a former President of the Court of Appeal, Justice Ayo Salami, from Kwara State, was as a result of a Memo written and presented to President Buhari by the Attorney General of the Federation and Minister of Justice – Abubakar Malami [SAN], against the EFCC interim Chairman. The Memo, it is informed, contained some serious allegations of malfeasance, corruption and insubordination, amongst many others. While submitting the Memo to the President, the AGF included a shortlist of three candidates for consideration to replace the anti-corruption agency’s boss. That suggests fait accompli for Magu.

There is no gainsaying that Ibrahim Magu, since ascending the Chair of the EFCC, had done such a good jobs in bringing some corrupt Nigerians to book. He and his team have succeeded in securing convictions against many. Recovery of stolen National wealth by some unscrupulous Nigerians was successfully prosecuted in some quarters. He fought some gallant battles. Yes, these are on record.

Also on record were battles of pursuing some known notoriously corruption-infested Nigerians which he refused to pursue. He did not mix words saying to critics at some points that “you are not to tell us who to prosecute; we have our discretion within our limited resources to pursue those we shall pursue”.

We equally knew it, while his lordship lasted on the throne that too many foreign donors were really generous towards continuous prosecution of the anti-graft war and dollars really poured in for that cause. How he accounted for those currencies that arrived from across the sea to the acceptability of his bosses was another ball game entirely. Innuendoes of lack of transparency against him and the organization he presided over became more of a norm.

A golden fish knows that there can never be any hiding place for it. As such, like those living in glass houses, stone throwing mustn’t be instrument of pastime play. Magu did not live above Board like Caesar’s wife; it was alleged by some of those dinning and winning with him. Of course, the office he held placed him high with power and authority, almost adoring him with absolute power and that corrupts absolutely, as we all have been thought from the old school of wisdom. Ibrahim Magu chose to bring men of great but scandalous reputation close to himself. And that must be for a reason anyway. But whatever the strength and common sense of that reason, observers did not find wisdom there.

Another of his undoing was the contempt he developed for his boss – the Attorney General of the Federation and Minister for Justice, Abubakar Malami. He should have known that Malami is a very mean fellow, with the attributes of patience and silence of the cobra snake, just like himself also. The Fulani and the Kanuri are equal and proportionate in these dynamics of retribution. Yet, Magu did what he did. Why?

A friend close to both of them “up there” told me that Magu “thought he knew too much about Malami”. Did he really know so much about him, I asked this my privileged friend? “Yes”, he answered, adding that “they are both not too clean as to go to equity”. What that means is that we should be waiting for Magu to fire his first “deadly weapon from his arsenal” out of the avalanche of information he has gathered over the years against his most ferocious boss and enemy.

Back to the narration, Ibrahim Magu is not new to investigations bordering on his credibility. Permit me to give only one example here.

In the past, a former Minister of Finance, Mrs. Kemi Adeosun, had also asked Magu to clarify where the cash recoveries from May 2015 to January 2018 were deposited and to provide accompanying evidence. In a letter with reference number: FM/HMF/EFCC/S-EFCC-REC/2018/1 dated February 9, 2018, and entitled: “Summary of EFCC Recoveries from May 2015 to January 2018,” Adeosun said the clarification became necessary based on the information available to the Office of Accountant-General of the Federation.

The minister said: ‘’This is to notify you of the records of cash asset recoveries in the custody of the EFCC from May 2015 till date based on information available to the Office of the Accountant-General of the Federation (attached). It has, however, come to the attention of the Ministry of Finance, the use of recovery figures in media reports by the EFCC that do not reconcile with the records of the ministry. You are, therefore, kindly requested to clarify where these cash recoveries have been deposited and provide accompanying evidence.”

Ibrahim Magu’s response to that query was not on record for the viewing of this writer, at least. And this may be for the reason that the high and mighty ones within the Villa then were still backing him. He survived all those “useless accusations”, as he was quoted of saying then. But the tide has changed against Magu, with the waters returning faster to the Ocean. Now, let us look at some of the accusations in the Memo Abubakar Malami sent to the President that is now working miracle against the Miracle-Worker himself.

A very reliable source within the corridor of power was quoted as saying: “I can authoritatively tell you that though Magu has survived previous plots to remove him, the AGF’s legal opinion remains the deadliest plot to get Magu out of the EFCC as the AGF’s letter to the president contained 22 weighty allegations that require Buhari’s decision on whether or not to send Magu’s name to the Senate for confirmation or replace him. This is because the office of the AGF is the supervising ministry of the EFCC and so his legal opinion cannot be treated with levity. For example, Malami alleged accounting gaps or discrepancies of figures concerning the recovered assets, claiming that Magu was not transparent enough in the management of recovered assets.”

One thing l shall venture to say before drawing the curtain on this discuss is that Ibrahim Magu might be corrupt as his boss – Abubakar Malami, has posited. But the accusations laid by the Minister for Justice against him shouldn’t be taken sink and hook as “holiness fighting evil”, for it shall be one life-time mistake if we come to that conclusion. Today is for Magu while tomorrow might be for Malami, because my source spoke with authority about the uncleanliness of both men. It could only be a matter of time therefore.

We need to go, but not without pulling a joker on this observation of my source. There are too many high profile cases being prosecuted by the EFCC which the Attorney General of the Federation withdrew from Magu’s EFCC and most of those cases went sine die. Some were out rightly discontinued within 72 hours of telling EFCC to hand off by the Attorney General of the Federation.

The point being make has nothing to do with the authority of the AGF to intervene at any time in taking over cases from other prosecuting agencies, just as he did most recently in taking over the case of that notorious Kidnapper from Taraba State; Wadume, from the Inspector General of Police. The AGF can also file for discontinuance of any case at any given time he wishes, being the number one custodian of the nation’s laws. It is his constitutional right to do so. But then might remain one big question.

Ibrahim Magu had defied some of the Honourable Minister of Justice orders on some of these withdrawals. And there is a class of thought that believe or think that he [Magu] had good reasons to do so considering the outcome of previous cases taken over by the AGF.

It may be for this reason that the Presidential Advisory Committee Against Corruption (PACAC) is saying that “the invitation of the Magu to face a presidential panel probing the activities of the anti-graft agency was a product of power play by power blocs in government”. And PACAC is concluding that Abubakar Malami might just be representing one of those powerful blocks. Could that be true? Let me leave it just like that.

It may end up that a war against corruption is being waged against Ibrahim Magu. It might as well be a case of bigger corruption fighting a smaller corruption. Or, it might totally be a battle of corrupt people fighting themselves for the legacy of corruption to be entrenched in Nigeria.

If this happens, then it shall be a monumental tragedy for Nigeria! God forbid.

52 thoughts on “WHEN THE HUNTER BECOMES THE HUNTED: CASE STUDY OF IBRAHIM MAGU.”