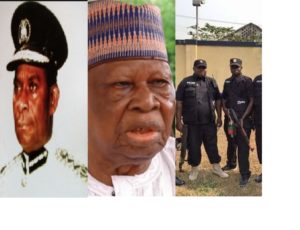 I must start this column by thanking the Nigerian Youths, for rising up in unison and in one accord, against an animalistic amoebic octopus; which the Nigeria Police Force is made of, with the slogan #EndSARS and #EndPolicebrutality.

The beauty of it, beyond the dynamism of the Rise, is the strength and committed determination Nigerian Youths are deploying into prosecution of this most decisive mission – a mission l would name as a voyage of discovery into Nigeria actual destiny as a Nation.

The date of Sunday, October 11, 2020 shall remain ever green in our memory as it was the day this volcanic and thunderous rupture from the camp of Nigerian Youths shook the foundation of a nation that have wobbled and fumbled to nowhere, for over One Hundred years; counting from 1914, when the fraudulent amalgamation of Northern and Southern Protectorates took place. It was the day; responding to the call of Nigerian Youths to #EndSARS and #EndPoliceBrutality, the Nigerian Inspector General of Police – Mohammed Adamu, announced disbandment of the notorious Special Anti-Robbery Squad [SARS] of the Nigeria Police Force, all through the 36 States – including the Federal Capital Territory of Abuja. Ditto the Federal Special Anti-Robbery Squad; which was also consigned to dustbin of anachronistic history.

The vigilant Nigerian Youths, articulating a foul-play about the enduring and binding Constitutionality of the announcement made by the IGP; as against the President and Commander-in-Chief of the Nigerian Armed Forces, who is empowered by the Nigerian 1999 Constitution [as amended] to make such declaration, stood firm on its protest, insisting that they would not shift ground until the President spoke to them.

And the President – Muhammadu Buhari, finally spoke, on Monday, October 12, 2020, affirming and concurring with the desire of the Nigerian Youths, not only on the disbandment of the brutish and animalistic SARS, but promising a very far-reaching reformation of the Nigeria Police Force. The Will of the Nigerian People; properly prosecuted by its Youth, for once in the annals of our history, prevailed.

The People of Nigeria won!

Nigeria as a country won!

Let us take a very deep and appropriate interrogation into those knotty issues that confronted the Nigeria Police Force; which later provoked, sagaciously anyway, the sensibility of the Nigerian People. This is necessary because until such exercise is thoroughly carried out, we might be dealing only with the Present, without facts of how it began. Facts of any story are entrenched in the beginning of that story. Let us take a smart walk backwards; along memory lane to the very beginning of the Nigeria Police Force. And we are not doing this without capturing some vexatious issues of the moment.

The Special Anti-Robbery Squad of the Nigeria Police Force was set-up in 1984, during the Military Regime of Major General Muhammadu Buhari. Setting up of the special police outfit, outstandingly created to fight “hard and tough crimes”, was a child of necessity. It was a time that highly technical robberies, scientifically encrypted assassinations, hard drug pushing and similar crimes were on the rise in the country.

I remember vividly how I met the then Inspector General of Police – Etim Okon Inyang, in his official house; at Number 11, Bourdillon Road, Ikoyi, in what l considered to be in a very foul mood. And because of my closeness to the Oldman [I was then Head of Crime Bureau with the Punch Newspaper and the man accepted me as his son], he narrated his worries about the continued rising of tough crimes in the country to me. He also told me that he discussed the issue with the Head of State [Major General Muhammadu Buhari] that afternoon.

That evening discussion obviously gave birth to the idea of forming a specially trained police unit to be able to deal with the menace of tougher crimes. The next day, the Inspector General sent for a name that towers over and above others in crime investigative matters, and that was Fulani Kwajafa, who was given a marching order to assemble some of the best in the Criminal Investigation Department [CID], mostly from Alagbon Close, Ikoyi, where the Headquarters of the CID was based.

Permit me to place it on record that Fulani Kwajafa, called upon to take responsibility of being the first Commissioner of Police to take command of the Squad, was a very meticulous police investigator, almost marching the professional skill of another doyen of investigation [in the police force then]; the late Assistant Inspector General of Police; C.T. Duwon [C.T. Duwon was killed through detonation of capsule in his office, at the Force Headquarters – Kam Salem House, by some Cocaine Barons].

Let me say it again that Fulani Kwajafa; who joined the Nigeria Police Force in 1954, was meticulous, diligent, and also very brutal when he engaged the crime community.

Fulani Kwajafa picked eleven officers and some men for the assignment and after a very rigorous and extensive training, the Special Anti-Robbery Squad moved out of Alagbon Close, in Ikoyi, to Adeniji Adele Police Station, for good. It was a crack squad. It was daring in all facets of crime fighting ventures. It was intelligence-based. The IGP placed the Squad strictly under the Deputy Inspector General of Police directly, without passing through any of the 5 Assistant Inspector General of Police structure of that era.

The Unit then strictly limited its assignment to pursuance of hard criminals like armed robbers and those within that category. They were never to seen on the streets checking vehicles or people. The Unit had the whole country as its constituency, and it was not decentralized. It left Lagos to any part of the country – from Maiduguri to Port Harcourt, and all over Nigeria, to operate and returned back to Lagos. And within a very short period of its formation, the Unit brought down operations of nefarious criminals all over the country. The Unit worked in full collaboration with the Criminal Investigation Department through the office of the IGP; which passed information down to them from the DIG office.

Nigerian people were satisfied with the Unit’s operation then and the Nigeria Police Force was proud of the Squad, so much so that the DIG – Muhammadu Jemita Gambo, called it “My Squad” and this was because of the excellence of performances of the outfit.

That excellent Squad, aptly described above has, over the time grown and degenerated into an octopus unit of the Nigeria Police, with an incorrigible reputation for brutality, violence, and extra-judicial killing, in addition to human right abuses.

Besides the Special Anti-Robbery Squad, there are other special tactical squads created for some specialized operations as deemed fit by different IGPs, such as the Special Tactical Squad, Intelligence Response Team, Anti-Cultism Squad, Anti-Kidnapping Squad and others. There is also the Mobile Police unit – MOPOL, known as “Kill and Go”, which preceded all these units, as the MOPOL was created in 1963 [the first 30 men or thereabout were trained in Malaysia that year – 1963].

Brutalizing and extra-judicial killing of Nigerians is not peculiar only to the SARS. Almost all segments of the Police Force are pathological and serial killers. It is bad enough that the citizen sometimes does not know who to pitch tent with – the known armed robber, assassin, kidnapper, ritualist, cultist or police. For example, the audacity of some policemen in regular patrol – we are not talking of SARS or other Tactical Units only, in exploiting and stealing from citizens defies human interpretation.

Or how can one justify Police regular patrol units, moving about with Point of Sale [POS] machine, for forcefully connecting money from Nigerians, even at gun point? Some of these policemen are ready to follow “suspects” [that is how they call their co-citizen that they are ready to steal from] to Automated Teller Machine [ATM] point in order to empty the ”customer’s account”. And sometimes, a police officer would forcefully brutalize a citizen to the point of causing transfer being made into his [police/thief] account, through internet banking code.

The question to be asked and answered is this: Could this be the Police Force created for “this part of the Niger” in 1861? Or when did the Police lot take a suicidal nose-diving into this hellish place of abyss? Is there anything that can be done to retrieve the lost Nigerian Police back to life?

Wait for part two of this clinical narration, which shall surely take us to the genesis of how our police force began – in 1861.

145 thoughts on “THE NIGERIA POLICE IN METAPHOR OF BRUTALITY – IT IS CONCEPT OF CREATION.”