Tomorrow, April 5, 2021, comes differently at Lagos Talks 91.3 FM, when Yours Sincerely – The Guru, by the grace of God, shall hit the airwaves live, from 09:30 to 11:00am. Yes, it shall be different because this shall be the first time, in the life history of this program, which is running close to 3 years (it started as Sadiq & The Guru on October 1st, 2018) now, that an invited Guest shall be allocated a whole one hour, of the Program’s  One hour Thirty minutes weekly allocation.

It has never happened before, but it is happening tomorrow, with a special Guest The Guru is bringing to the studio.
That this alteration is happening is an evidence of the importance of this personality and the issue we shall be discussing. Who is this important Guest? Oh, of course, you have the right to know, but you shall be holding on for a while as we shall return to meeting my Guest for tomorrow in a moment.
Nigeria is gradually becoming a community of oddities, in its entirety. It is now a country where nothing is assured unless the negatives. Everything comes easy and speedily goes easy. And this is worrisome.
The only thing you can possibly think of guarantying is those negative occurrences of Nigeria’s today.
Has Nigerian leadership not fail woefully in all ramifications? Is Nigeria not gradually – if not already there, moving into a state of nature; where life is short and brutal? What is the value of life in today’s Nigeria?
In a country where a major University Teaching Hospital will suspend all surgeries because of “lack of water” – what do we compare that country to?
In a country where the President has to travel out for medical checkup when all Residents doctors in the same country are embarking on national strike because of government’s failure to meet its primary obligations to the doctors – what will you compare that country to.
In a country where peaceful protests is to be “brought under control by the usage of both blank and live bullets”, which rating will you give to that country.
Or, which narration will you give to a country where a State’s sitting Governor is being hunted to be killed by some ethnic nationalist’s bandits ; where an identifiable ruthless ethnic nationality is claiming responsibility for such dastard act; even announcing that the failure to kill the governor was due to an own tactical operational error, and the Country’s leadership is deploying security agencies to “fish out the criminals”, without arresting those who confessed the crime?
That Nigeria is moving faster nearer to Hell, having left Purgatory, is becoming an uncontested fact of life. It never headed the Heavenly way at anytime, and this is the tragedy of Nigeria’s narration.
Yet, The Guru is full of hope that HELP will come for Nigeria to LIVE again. 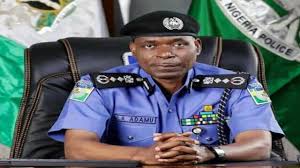 Let us periscope a few things first before returning to our tomorrow’s Guest.
The Divisional Police Office at Festac Town, last week Thursday, April 1, 2021, “introduced” a new operational madness into community policing. It was bizarre in totality.
Two Nigerian Passport seeking applicants at the Festac Immigration Passport office had what looked like a small misunderstanding between themselves, and other applicants, with some Immigration Officers, meditated and resolved the conflict. Or so they thought.
But one of the two involved in the conflict did not waste time telling everybody in the Immigration office that because of the number of highly placed people he knew in Nigeria, he would surely lock up the other one for days in a police station.
It took less than 30 minutes when the aggressor carried out his threat as one gun-wading policeman arrived the Immigration office; which is on “A” Close of 3rd Avenue, in Festac Town, threatening to shoot anyone that might stop him from “taking the criminal away”.
The “mad” policeman would not even listen to Immigration Officers’ narration, to dislodge the magazine of his gun for safekeeping; as operational procedures demanded, before entering the premises. At the end, the better trained Immigration Officers disarmed the policeman, detained him and the man that brought him.
A call originating from the Controller General of the Nigerian Immigration Services to the Inspector General of the Nigeria Police Force resolved the matter, only for the truth that the matter was not even entered into the Police Station diary on the first place. Who is the superior police Officer that equipped the “mad” Policeman with a fully loaded AK47 to embark on that “killing” errand?
The Guru is waiting for Compol Lagos – CP Odumosu, to revert, having established investigation with him through his PRO; Supol Olumuyiwa Adejobi.

The Nigerian Ports Authority was established by Act of Parliament; Cap 155 of the Law of the Federation of 1954 while the Authority became operational on Friday, April 1, 1955. In spite of the fact that the Authority came into operational on April Fools Day, there was nothing fooling about its operations till the Military took over Political Power in Nigeria.
The NPA, ditto all other government Institutions in Nigeria, have never seen sanity since the military’s incursion into our political life. The rest of our trajectories are a well established historical recording for us and posterity – albeit ugly documentations.
Take the Apapa/Oshodi gridlock – as it was called before, because the gridlock has extended into the totality of Lagos metropolis – originated from ports operators malfeasance, in Apapa and Tin Can Island Ports. It did not start today. It started during President Olusegun Obasanjo’s administration  – from 1999 to 2007. And it has lingered till date. Yar’adua inherited the gridlock from Obasanjo, and passed same to Goodluck Jonathan; the latter passed the same mess to Muhammadu Buhari.
The gridlock had successfully disgraced all governmental powers, both of Lagos State and the Federal Government. It even subdued a Presidential Taskforce and made nonsensicality of the Vice President of the Nigerian Federation’ influence and authority, as he was the Chairman of the Presidential Taskforce. What a shame!
It looked like hope was totally lost until the Managing Director of the Nigerian Ports Authority; Hadiza Bala Usman, came to the country’s rescue, by developing an electronic Apps, for calling in Trailers and Trucks for ports’ operation, which is called “Eto”.
This magical Apps brought sanity into the Ports and our roads for a few weeks before corruption started fighting back against Hadiza’s magical Apps.
This woman of substance; loaded with brain and beauty, has vowed not to let go. And she is standing tall enough, at the place of achievement, not to fail!
Hadiza Bala Usman, The Managing Director of the Nigerian Ports Authority is our Guest tomorrow, live, at Lagos Talks 91.3 FM. Would you blame me for yielding a full One hour to her?
I am taking responsibility if my decision of inviting and devoting One hour to her is an error. She is a personality of substance any day, for your delight.
With some noise, ladies and gentlemen, make welcome Hadiza Bala Usman – the Managing Director of the Nigerian Ports Authority!
The Guru is now on You Tube channel – Godwin The Guru, log in to subscribe and like; this costs you nothing except the data. You will be helping to “move my ministry to the permanent site”, in the words of Gordons.
Tomorrow, every word you shall be hearing from Hadiza Bala Usman will be enough for your Historical Perspective, Periscope and Knowledge Dropbox.
Godwin Etakibuebu (The Guru)