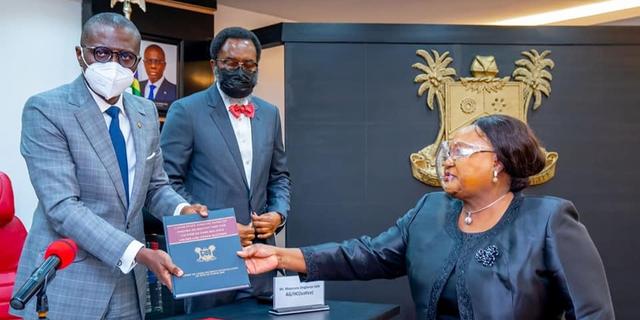 The fact that officers and men of the Nigerian Army, ditto those of the Nigeria Police Force; under the only one individual that could deploy the Nigerian Armed Forces into area of hostility, battle or war within and outside the country, as authorized by the Nigerian 1999 Constitution, massacred Nigerian Youths on a peaceful protests at the Lekki Tollgate on the night of October 20, 2020, is now in the public domain of world market place. This is very factual.

Though itemization and identification of the facts of this monumental sin against humanity was brought to the public domain by no one else but the Panel of Inquiry set up to look into what actually happened at the Lagos Lekki Tollgate on the night of October 20, 2020, by the Lagos State Government, on Monday, November 15, 2021, with vivid narration of how the hands of our political leaders are stained with blood of our Youths.

After the massacre of the protesting Nigerian Youths at the Tollgate, Lagos State Government added finding of how “our future” was murdered by the Nigerian State Security Apparatus to the assignment of the Judicial Panel; which was earlier inaugurated to determine the extent of brutalization of Nigerian citizens by the branch of the Nigeria Police Force called SARS

The Panel set up by Lagos State Government to look into the two matters – albeit the #EndSARS brutality against Nigerian citizens and the Lekki Tollgate massacre, had Justice Doris Okuwobi; a retired Chief Judge of Lagos State, as Chairman; with Babajide Boye as Secretary. Other members of the panel included Ebun-Olu Adegboruwa [SAN], Taiwo Lakanu, a retired Deputy Inspector General of Police (DIG), Patience Patrick-Udoh, ‘Segun Awosanya, Oluwatoyin Odusanya, Lucas Koyejo and Majekodunmi Oluwaseun.

When the massive killing of those Nigerian Youths took place, the first thing to be heard from President Muhammadu Buhari’s Government was total denial of what happened at the Lekki Tollgate in Lagos. The continuously garrulous and lying Alhaji Lai Mohammed; Buhari’s Minister of Communication, came out with a categorical statement, saying nobody was shot dead at the Toll Plaza.

He; the greatest lying idol of this century, even challenged the CNN; which reported the ugly scenario with factual accuracy, to retract the story and apologise or else it would be sanctioned.

Lai Mohammed – Nigerian Minister if Information, doing what he knows how to do best, on the Lekki Tollgate massacre.

General Lucky Irabor [Chief of Defense Staff] not happy with the report.

This was without the Army revealing to Nigerians the person who “deployed” them [troops] to the scene of hostility. And the issue of “deployment” is very crucial because by the standard of the Nigerian 1999 Constitution, it is only one person in Nigeria that has the full constitutional authority to “deploy” troops to hostility zone, battle or war and that person is the President of the Federal Republic and Commander-in-Chief of the Nigerian Armed Forces.

Eventually, under the heat of investigation by the Justice Doris Okuwobi Panel, the Nigerian Army “admitted” of invading the Lagos Lekki Tollgate Plaza with “only blank bullets and not with live bullets”. That admission presupposed that if there were to be any fatality resulting out of bullet wound at the scene, such bullet couldn’t have been from the Army since what they went to the place with was only blank bullet.

Who ever heard of trained soldiers of any Army anywhere in the world being deployed to scene of hostility, battle or war with blank bullets? But, the Nigerian Army was never ashamed of telling the Nigerian people such cock and bull stories – all because this is “a Nigeria of anything goes”. This story was later to be amended to read something like – Yes; we went to the Lekki Tollgate Plaze with both blank and live bullets.

Yet, the Nigerian State; with all its political leaders, insisted that there was no human casualty or any fatality at the place on that night of October 20, 2020, when the Nigerian Army invaded.

But now, the chicken has come home to roost as the report of the Judicial Panel submitted a few days ago indicted the Lagos State Governor, the Nigerian Army and the Nigerian Police “for massacre at the Lekki Tollgate on the night of October 20, 2020”.

Read these two short teasers from the report of the Judicial Panel which Justice Doris Okuwobi and her colleagues submitted to the Lagos State Governor this last Monday to imagine the enormity of the crime committed against humanity on that night of October 20, 2020.

“The report said three trucks with brushes underneath were brought to the Lekki tollgate the following morning after the incident to clean up the scene of bloodstains and other evidence.“There was abundant evidence before the Panel that the Lagos State Waste Management Authority (LAWMA) indicated in its Twitter handle that it had effectively cleaned up the Lekki Toll Gate scene immediately after the incident of October 20, 2020,” the report stated.

Why don’t you hold your breath until we meet tomorrow at the usual place and time – Lagos Talks 91.3 FM when Yours Sincerely; The Guru, shall come on air live, as from 0930 hours, with his scintillating discussion of topical issues?

There are of course many other topical issues to be discussed tomorrow, by the grace of God, without compromising your favoured Historical Perspective, Periscope and Knowledge Dropbox.

1 thought on “My Sunday Broadcast: NOW WE KNOW THAT THERE WAS MASSACRE AT LEKKI TOLLGATE.”