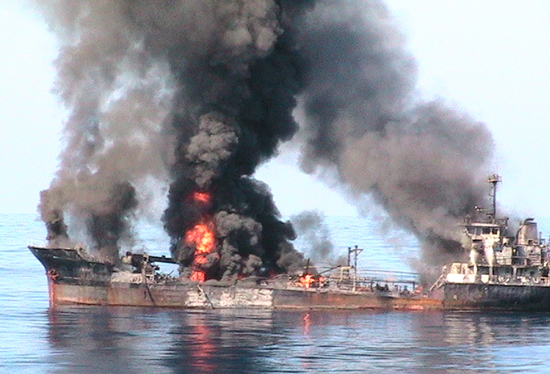 Tomorrow is Monday, January 7, 2022, another date we are all anticipating at Lagos Talks 91.3 FM, starting from 0930 hours when The Guru, sailing with Adu, takes command of the Nigerian Airwaves, doing what he knows how to do best, which is critical analysis of some Nigerian naughty political issues and dissemination of knowledge.

As always, there are many issues coming up for discussion tomorrow, by the grace of God. However, there is one of the many issues that stand taller over and above all others. And this is the “death” of M/T Trinity Spirit.

Trinity Spirit was a Motor Tanker [M/T] – or you can call it Motor Vessel [M/V]; which served as an Offshore Support Vessel or a Floating Oil Production and Storage Vessel; [FOPSV], a very massive Sea equipment with holding capacity of about 2 million barrels of oil, and a 274,774 DWT [Deadweight tonnage is a measurement of total contents of a ship including cargo, fuel, crew, passengers, food, water, boiler and every other thing onboard it], built 46 years ago – 1976, and measured 1,105ft.

It was this massive ship that encountered what is called blowup in the Maritime world, in the early hours of Wednesday, February 2, 2022. And when such happens – Master Mariners, Sailors, Seafarers, and in fact, every human being initiated to the culture of shipping and sailing, would understand that it is every contents of the ship – the platform, tanks and human materials that would be gone.

Trinity Spirit which had the capacity to process up to 22,000 barrels of oil per day, inject up to 40,000 barrels of water per day and store 2 million barrels of oil, was originally built in 1976, as earlier mentioned, and the latest upgrade took place in 1997, highlighting the age of the vessel. However, the truth remains that the Trinity Spirit was at the end of its lifespan; which is a cause for concern for other similar vessels and operations in Nigerian waters as they operate in a region with minimal regulations.

It exploded and sunk at the Ukpokiti Terminal, around Excravos, Warri South-west, Delta State, Nigeria, with 10 workers onboard, at the time of the blowup, still unaccounted for. The Trinity Spirit is located on OML 108. Conoco had held a 40% stake in the block but it transferred this interest to Shebah in 2004. The block holds the Ukpokiti field and a number of other discoveries.

I “mourned” the “demise” of Trinity Spirit as one would do for human being, and this is for a cogent reason. If the truth must be told, apart from those 10 workers that are yet to be accounted for – and they may not be likely accounted for alive, the economic loss of Trinity Spirit to Nigeria generally and to Seplat company – or the management of Shebah Exploration & Production Company Ltd (SEPCOL] particularly, shall remain too colossal to be thought of.

It is for this reason that I am bringing a petroleum expert to the studio, at Lagos Talks 91.3 FM, tomorrow, to throw more light on the matter.

Another story that needs taking our time seriously tomorrow is the Turn-Around-Maintenance [TAM] of the Port Harcourt Refinery; a matter that the Federal Government put at the front burner of the Nigerian people last year. Speaking through the Minister of State of Petroleum Resources [don’t forget that President Muhammadu Buhari is the de-factor Minister of that most lucrative and money-spinning ministry], Chief Timipre Marlin Sylva, the federal government spoke of 1.5 billion dollars borrowed for the repair of the Port Harcourt Refinery.

This was announced after all professionals in the petroleum industry, except those in government, said no to the proposal, because according to the Nigerian people, the money; so borrowed would go down the drain.

Yet the federal government, at its FEC meeting of March 23, 2021, approved the fraudulent contract. And the Minister gave specific dates when the Refinery shall be fixed and be refining to serve Nigerians.

“The Ministry of Petroleum Resources presented a memo on the rehabilitation of Port Harcourt refinery for the sum of 1.5 billion, and that memo was $1.5 billion and it was approved by council today.

Though the Minister earlier insisted that the money for the repair was not to be borrowed as he quoted some fictitious sources the money was to come from, he later goofed [liars would always forget what their initial statements were, hence they would need Nine lies to keep the first lie standing] when he let the cat out of the bag. Listen to what he said inadvertently.

Come with us tomorrow at Lagos Talks 91.3 FM studio, as Yours Sincerely – The Guru, will be giving you facts of how Nigerians have been regularly scammed under the guise of “projects”. This is just one of many others.

Your Historical Perspective, Periscope and Knowledge Dropbox are faithfully waiting for you.